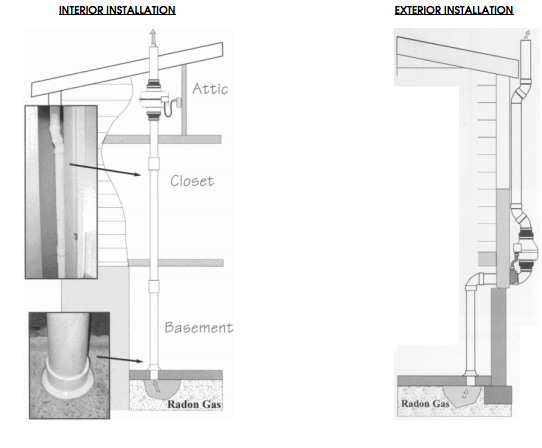 We’ve read the radon report, so now we know that long-term exposure to elevated levels of radon gas is harmful to our health. Now the question becomes, “What do I do about my “high radon reading?” The answer to that is to have it mitigated. Webster’s defines mitigation as 1) to make or become milder, less severe, less rigorous, or less painful; moderate. Therefore, radon mitigation simply means to lower the level so the effects are “less severe.” This is accomplished by what is called a “radon mitigation system.”

The process in which this is done is really quite simple. The radon gas that is permeating through the basement floor and hanging around the living areas needs an easier way to exit the house than through the normal “indoor / outdoor air exchange.” And a radon mitigation system does just that. By sealing all cracks and crevices where the gas is entering and providing a means in which the gas can escape the house, the indoor radon level will become lower. The most common means is usually a 4” PVC vent pipe that is placed into a hole bored into the basement’s concrete slab. This pipe is then vented to the outside.

There are several types of mitigation systems;. Two of the most common are:

An active radon mitigation system has four basis elements:
(1) An electric vent fan (located outside of the conditioned space, ie., in the attic, garage or outside the building envelope.
(2) A system failure warning device, usually in the form of a U-tube should also be installed. This is typically found in the basement.
(3) A vent pipe running between the sub-slab gravel up to  and above the roof line or eave.
(4) Sealed and caulked cracks and joints in the foundation walls and floor.

*Radon mitigation systems should be provided with caution labels on all floors where the pipe is exposed. The installer's contact information and date of system installation should also be present, usually found in the basement.

*Buildings with open crawl spaces typically cost more to mitigate, as fully sealing the crawl space and tapping the mitigation system below the vapor barrier will also be necessary with this type of installation.

For your information; The estimated life of a quality vent fan (operating continuously) is 10 years. In an existing home, the vent fan, wiring and piping are all part of the same installation.

A passive radon mitigation system if present, is usually installed at the time of construction. This has:
(1) a vent pipe extending from the slab up to above the roof or eave.
(2) A physical barrier (polyethylene membrane) between the house and foundation.

For more information on radon gas mitigation, contact the EPA.